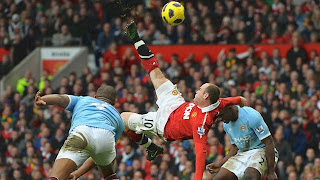 
I am a teacher at heart, and there are moments in the classroom when I can hardly hold the joy.

Today is Sunday, and I’ve been at the computer since 9 am preparing handouts and lessons for next week, writing letters in response to the letters students have written to me. I’m on a roll; I’m in flow – that state of mind, that state of being, when this flow – when you are ‘in the zone’, when ‘everything flows’.

Tomorrow is Valentine’s Day. And at the moment, I am in love with teaching; I can “hardly hold the joy.” On Thursday, my double session with Year 12 was one of those positive moments. They are moments to savour.

I stayed up late last night and watched the English Premier League soccer – the Manchester Derby: Manchester United V Manchester City - and witnessed a moment of athletic genius. Wayne Rooney, most observers agree, has had an ordinary season; he hasn’t scored a lot of goals. He’s been workmanlike, but hasn’t produced the kind of play that marked him as one of the most skillful strikers in English soccer. But late in the game, with the score at 1:1, Rooney produced an astonishing goal. The Man U player Ryan Giggs sent a high pass into the penalty area. Rooney launched himself high in the air, his body horizontal to the ground, and from 15 or 20 metres out, put the ball in the back corner of the net with a scissor kick. In jubilation he ran to the corner, raised his arms, and arched his back, and looked into the sky. His whole body was a statement, and what his action communicated was: “THAT is what I am capable of”.

His action spoke louder and more clearly than any words. The Australian reported Rooney as saying, later:
"I think it's the best goal I've ever scored, I saw it coming over and I thought, 'why not hit it? …It's the first overhead kick I've scored since school."
Ferguson saluted Rooney's winner as the best he had ever seen at Old Trafford.
"It was stunning," he said. "We've had some fantastic goals here - Rooney hit a volley against Newcastle some years ago - but in terms of execution you'll never see that."
There are moments … when I can hardly hold the joy. They are moments to savour – for all of us.
On Thursday, I felt like that. But as Parker Palmer writes in The courage to Teach:
…at other moments, the classroom is so lifeless or painful or confused – and I am so powerless to do anything about it – that my claim to be a teacher seems a transparent sham.
Friday morning, February 11, 2011. The day was disrupted: 20 teachers involved in a Restorative Practices PD; the kids viewing a motivational program in groups of around 200 in the Theatre. Year 7 & 8 were in the Theatre 1 & 2. I normally teach 8.3 in period 2, so I went in to help supervise, But Glennis and Steve – principal and Assistant principal – had everything under control. I grabbed a coffee from the staff room and retreated to my office to clear some of the backlog of paperwork, and to do some writing about curriculum. I was on track, focused. Two free periods in a row, I thought; a great opportunity to get a pile of work done.

I barely heard the bell for period 3; I was on song, churning out the words. Ten or twelve minutes later, over the PA came the following message:
“Mr. Carozzi. Could you go to C56 please.”

8.3. I should be teaching them in C56. I have them period THREE, NOT period TWO!

I felt that sinking feeling in my bowels and in my spirit – not unlike the utter dread that overtakes you when you spot a police car right behind you and he starts signaling for you to pull over.

I had worked hard to make my first weeks of teaching the best they could be. I’d spent almost two weeks in the school over the break shifting offices, organizing my new room, preparing resources and lesson plans. I was redefining myself as a teacher, working hard to create the optimum teaching/learning environment.
And now this! I cursed myself, cursed my disorganization, cursed the shambolic state of my being … I flailed about, mentally, trying to find a scapegoat for this
… mistake.

I had no trouble finding them: the disruptions to the day; having an extra period one; having to introduce the PD speaker as well; if the school had organized a working phone for my new office, I could have been spared the oh so public humiliation and embarrassment; they’re expecting too much of me; I have too many things running through my head. And of course: it’s a seniors’ moment, I’m getting too old for this caper.

And of course: this is my lot in life, being so often up on the high tower, surrounded by some people who are willing to make allowances, and some who are just waiting for me to fall – indeed, hoping I would!

At such moments, as Palmer puts it, my claim to be a teacher seems a transparent sham.
I thank the universe for Sheldon Kopp’s Laundry List, his 43 epigrams about how to live your life. The 43rd admonition on his list is:
‘Be prepared to forgive yourself again,
and again and again.”
I apologized to the class, settled them down, apologized again, and we settled to writing. It turned out not a bad lesson – albeit 15 or 20 minutes shorter that it should have been.

Posted by Barry Carozzi at 6:32 PM No comments: