77. Reflections on the process of Writing 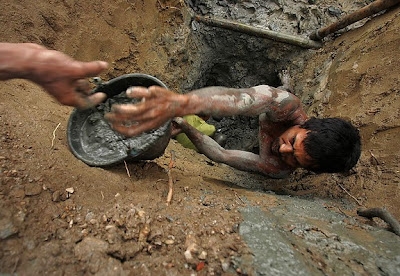 Analogies of the Writing process
Alluvial gold mining
Sighting a terrain that was potentially gold bearing, the miners would ‘test’ their theory; they’d pan for gold in the nearest creek. If there was a sign, they would stake a claim and begin digging a shaft. They often worked in pairs, taking turns; one would dig in the shaft, and fill the bucket with the soil and gravel; the other would operate the windlass, winding up the heavy bucket and tipping the dirt onto a pile. It was hard work, digging deep in the ground, in that claustrophobic space. Once they’d dug a large quantity, they would start sifting through the dirt. They would take the dirt, one pan full at a time, down to the water, and pan for gold.

They was a great deal of dirt that would be useless – especially the dirt that came from above the gold bearing strata; that would be simply left behind, forming a mullock heap. (Mullock is one of my favourite words; why, I don’t know, except that I used to enjoy wandering around mullock heaps in Ballarat when we visited Uncle Gordon. I recall, too, finding an old, abandoned windlass in the scrub near Ballarat, when I went on a Scout camp there in the mid 1950s.)

The analogies with writing are clear enough. The writer mines his mind, digging up the contents of memory and imagination, and then sorting through the pile in search of the gold. Writing, like alluvial gold mining, takes place in two major phases. First, there is the collection of the raw materials, as the writer digs up all she can. This can be demanding work; it can be heavy going at times. But once a sizable mass of material is collected, the second phase can begin: the sorting and refining phase that we call editing. Here, the gold is separated from the mullock.

The Water Bore
The second analogy is the water bore. At Sandy Point, where we owned a holiday shack back in the 1970s, the Hendersons came and “put down a bore”. It took them a day to dig the bore. They had to dig down until they had found the water table: that level where water is readily drawn out of its surrounding shale environment. Once the bore is in place, a relatively small pump will provide sufficient energy to draw up all the water you might need. Once the bore is put down, and a pump is in place, the water flows. Each time the bore is stopped, it needs to be primed; the flow needs to be re-established. If the bore lies idle for a lengthy time, it can become blocked.
Again, the analogies with writing are clear. The underground source of material – memory, imagination, the unconscious – is almost infinite. As Malouf once observed, the first twenty years of our lives provide us with sufficient material to fill three lifetimes of writing. We have lots to write about. Once we get underway, once we tap that huge reservoir, once we have flow, the writing simply emerges. The trick is to establish flow each time we put pen to paper, or set our minds and fingers working on the keyboard of our computers.
The Mullock Heap/ The Storage Tank

The dirt and gravel gets piled up on a mullock heap. The water from the bore can be stored in a tank.

Once you've dug up the gold-bearing ore - once you've got the flow of water established - you have to store the stuff somewhere.

That's where the Writer's Journal comes in.

The idea of the Writing Agenda is to provide us with a storage area for our writing - for our false starts, our snippets of conversation, our plot outlines our outlandish ideas.

It's also a place where we can keep notes about OTHER PLACES where gold might be found.

I keep a WRITING AGENDA, and keep adding to it, as possible topics and projects slip into my mind. My WRITING AGENDA provides an endless supply of things to write about. And each piece we write throws up more items for our Writing Agenda, so that the growth is exponential.

Sample from my Writing Agenda

Whichever analogy, whichever metaphor we use to characterise the writing process, the notion is fairly clear: the writer taps the flow of consciousness, dips into the stream of consciousness and works with what emerges. It is not simply a “taking from”; what is drawn out is also changes in the process. Image, snapshot, memory, misty feeling/ thought, vague recollection is reworked. The idea is formed at the point of utterance; that was how John Dixon put it, yet that is not right either. The idea does “exist” in some form; indeed, part of the business of writing is to match the words on the page with the thought in the head, while asking the question: Have I said what I meant? Have I said what I seem to have meant, what I think perhaps I meant?

Our writing emerges out of the swirling currents of thought and feeling and intention, and takes form on the page or screen. This is Klauser’s Ariel in operation. Out of the Right Brain comes a seemingly endless stream of images, ideas, memories, speculations, all feeling-laden and motive driven … once we have tapped the stream and got them down on paper, we can then bring the Left Brain into operation. We bring our critical intelligence to bear. We can “interrogate” our own text: Does this make sense? Is it well ordered? Are our conclusions supported by evidence? Do our characters seem real?

Writers march to a different beat: Left, Right, Left, Right ... and so on until the manuscript is finished and edited and sent off for publication...
Posted by Barry Carozzi at 2:54 AM